So you might have seen Jon Hamm running around lately crying about how him & his XXL penis are being objectified by women around the world (and specifically in ‘creepy’ blogs like this  http://jonhammswang.tumblr.com ).

But i have to ask, what’s the difference between this and the obscene amount of viral and unwanted attention Selma Hayeks exquisite breasts bring her. Yeah, it’s annoying but you don’t hear her complaining. Here’s to a break through in sexual equality. Suck it up Jon. 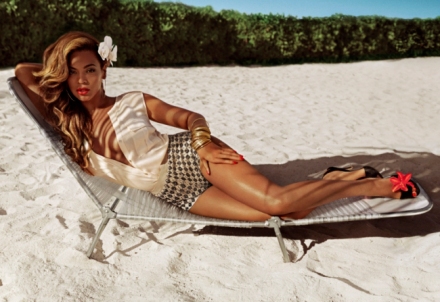 In case you havn’t heard the goss, word on the street is that H&M will be opening 2 Flagship stores in Australia, one on Melbourne & one in Sydney (Yay for us!)

This is the first and only image released from Beyoncé‘s upcoming Summer 2013 campaign for H&M, shot by photographers Inez van Lamsweerde and Vinoodh Matadin in Nassau, Bahamas earlier this year.

She will be wearing pieces from the H&M summer collection inspired by her style. In addition to being the face of the collection Queen Bey was also involved in the design process. In a press release, she says “I’ve always liked H&M’s focus on fun and affordable fashion. I really loved the concept we collaborated on to explore the different emotions of women represented by the four elements — fire, water, earth and wind. It was a beautiful shoot on a tropical island. It felt more like making a video than a commercial.”

The print ads will read ‘Beyoncé as Mrs Carter for H&M’, a reference to the name of her world tour, The Mrs Carter Show, which starts in April. The singer has also recorded a track called ‘Standing on the Sun’ which will also feature in the H&M ad campaign.
We cannot wait to see what H&M are going to bring to our shores!
Goss here…

Summer sales really do help to ease the transition from warm nights to cold dark days. This one will especially help…

Up to 80% off your favourite Cruise & Summer styles!

Inside the humble jacket…

and a slideshow of images here

The world’s designers recently presented their new looks on catwalks from New York to Paris during Fashion Week, so I decided to hunt through the closet — err, browse the WordPress.com community — for some eye-catching fashion blogs that not only stay on top of the trends du jour, but customize their themes to reflect their own personal styles.

Today, let’s shine the spotlight on these blogs:

Corrie created Brooklyn Bliss as a personal blog, which has since transformed into a popular site for fashion, design, and vegan lifestyle, focused on vegan-friendly and cruelty-free products. Corrie has really made the site her own, customizing Bueno in cool ways. I love the textured custom background of bricks, which adds an edge, and also like how she uses the Custom Design upgrade: she’s activated bold, stencil-like font for the site title, post titles, and menu items, and splashes bright magenta across…

Apparently last year was successful in terms of roof top markets so the Surry Hills rooftop market is back in March celebrating the suburb’s standout retailers which is great for those that missed out. The pop-up market includes products from Dinosaur Designs, Naked Indiana, Shelf/Life, Citizens of the World, Single Origin Roasters, the Sandwich Shop and many more. Go there for the shopping and stick around for beers and tunes as the sun goes down.